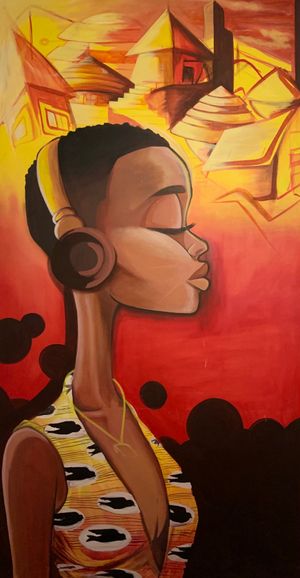 Patriot inherited his mother's passion for drawing. During his adolescence, he was quickly attracted to the Hip-Hop movement and began to Graffiti. Following his baccalaureate in 2001, he began his second year at the Faculty of Lomé in Economics and Accounting, but the artistic community attracted him and he felt that this was where he would really flourish. In 2003, his meeting with Max De Campos, the first initiator of Graffiti. 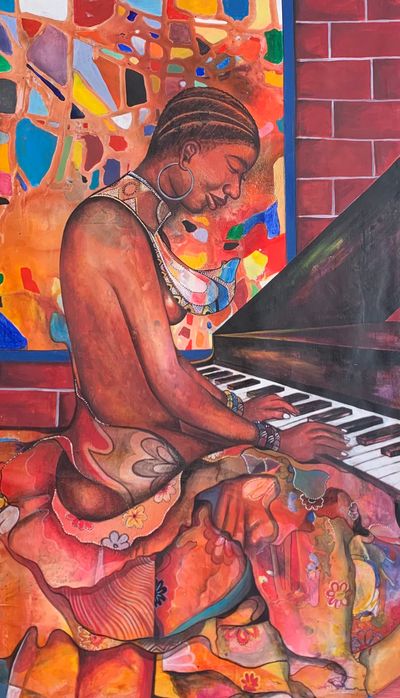 Self-taught, Axion was inspired by his environment. The rendering of his inspiring paintings give a rise to a realistic style that distinguishes him in his artistic environment. The work provided for more than 25 years has enable him to exhibit his work on several occasions in Togo his native country in 2005 at the FRENCH embassy and in 2008 at the Goethe Institute and in 2011 at Beneficia Life.In 2000, he joined the Logone Graff Crew and has since evolved his art inspired by tradition and street art.

Inspired by humanity Axion is committed and defends its value through art. Since 2016, he has participated in Graff Education and recently digital Hackathon launched by GIZ in Lome, Togo capital to respond to the COVID 19 crisis.

Axion, along with fellow artists Patriot and Trez have mobilized to build and awareness project. They have graffiti giant wall murals in the city of the benefit of vulnerable population. 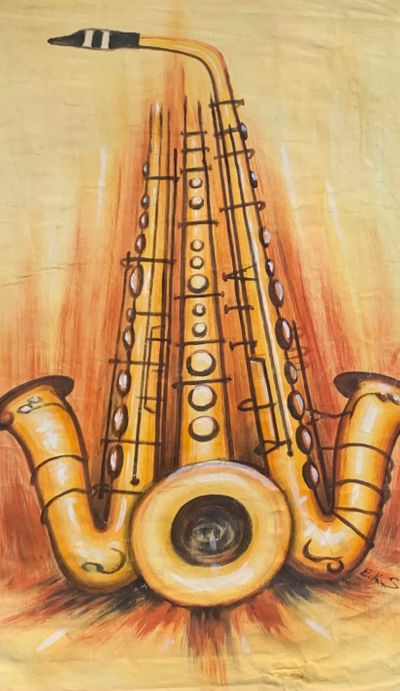 A musician and father of two by day and painter by night. Born in the heart of Togo, he found his love for the artist pallet. Felex grew up without parents making him an orphan for most of his childhood. He started his journey in the arts, to escape the reality of being parentless. Through these unfortunate circumstances he found a positive outlet and unique talent for capturing the beauty of the world around him. Finding the ability to soar, he found mentors that taught him how to sculpt. There after, he decided to connect with painting courses throughout different street schools in Africa, this can be seen in many of his works. It is our pleasure to assist in bringing forth his work for the world to view. 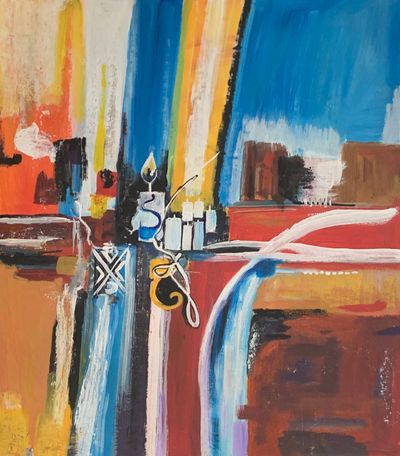 My wife and I finally found our calling in life to embrace our fellow man near and Far. Felex and Bruce, have hopes of coming to USA and sharing their work and creating a new life.

With this in mind, Alima and I have started importing the works of the two artists. I have been asked to curate for them here in the states. No matter how much profit accumulates per month, we send back to the families and village of Felex and Bruce. We have built a bridge that we have committed to continue building, and growing our family with the likes of Felex and Bruce in mind.

We thank you for your support through the purchase of our pieces. By purchasing our art, you share our story, our newly found family, and the beginning of a wonderful legacy from Africa to America; we are to help all man kind. 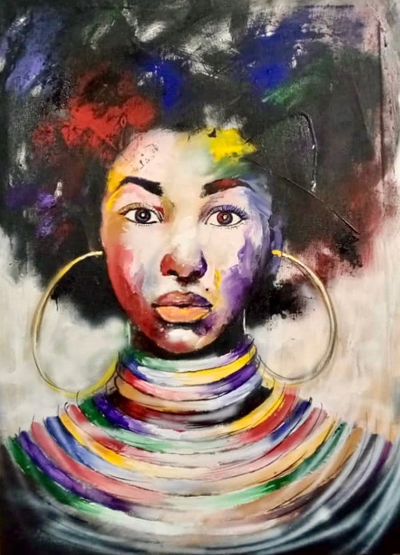 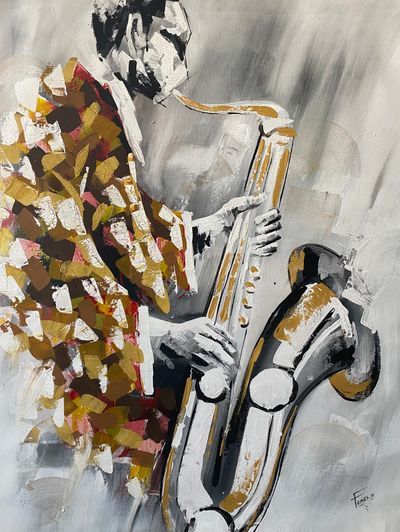 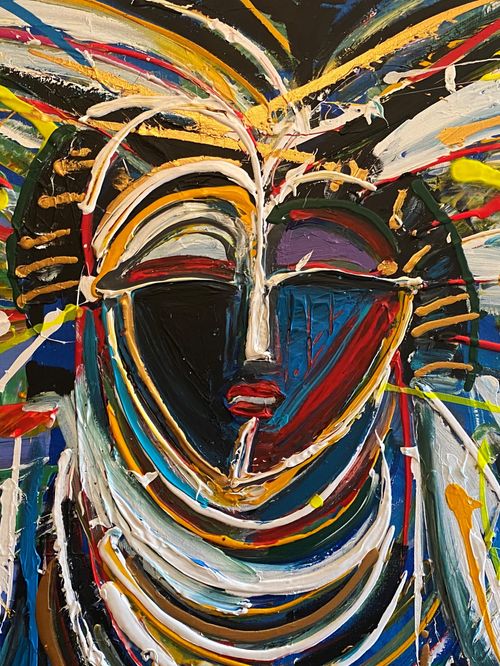 Ernani Silva, artist, curator, educator and mentor was born in the hills out- side of Rio de Janeiro. He encountered many adversities. At four years of age he picked up the pencil, pen and natural fruit juices and applied them to paper. He had his first gallery showing in 1969. He also introduced painting as an alternative to violence for youth in the hills of Rio.

Ernani is known for his freedom of expression and use of strong vibrant colors that move across the paper as if the figures were dancing or playing a musical instrument. He speaks several different languages and is passionate about art and art his- tory. The language he speaks best is with his brush or with the paint directly from the tube applied to canvas.

In keeping with his commitment to his friends, Ernani’s works are all originals on paper, wood or canvas. Art has always been a great investment and there is no better time to own an original by Ernani Silva. In 2009 he celebrated 40 years of exhibiting his original work in New York art galleries.

Dominique Alexandria is a mother, creative, daughter, sister, and friend. She has been freelancing for over ten years, yet has been inspired to create since the tender age of four. As the owner of Caribago Designs (pronounced, “CARRY-BAY-GO”), Dominique creates intersections of brand authenticity for her clients by embodying what they stand for and who they aspire to help along the way through visual creative expression.

She has worked with growing brands from design to image development. Dominique has also created her own line of art work through textile designs, mixed media digital & print designs, as well as stylized photography of nature in its most natural light.

Dominique has been the implementer, the motivator and the negotiator for many of her clientele, both in front of and off the camera. As a single mother, Dominique still manages to pursue her creative dreams successfully whilst juggling the art of family and education along the way. Alexandria has worked with brands and created imagery in the United Kingdom, Italy, Ghana, Canada, Jamaica, the Bahamas, Bermuda, Trinidad & Tobago, U.A.E, and Bali, Indonesia. She is known for bringing out the happiest state of mind for others just by genuine conversation and action. 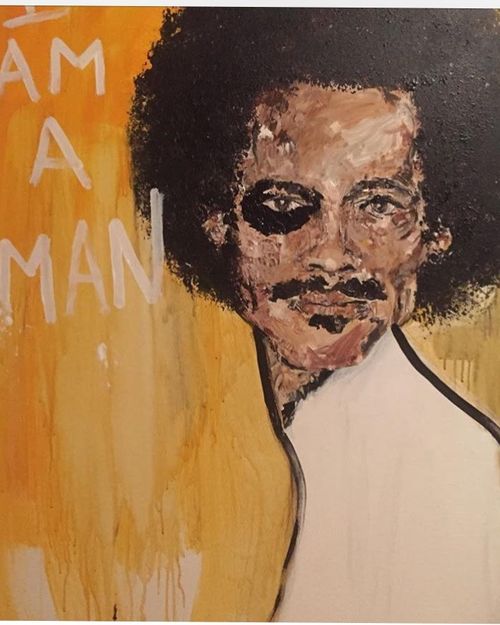 “I was a Homeless drug addict for ten years, I picked out of garbage cans to eat and now I’m here.”

Sage's debut into the Art World was a group show in 2013 called Nebula. It was held in an Airplane Hanger in Santa Monica, CA and was attended by some 500 people. In early 2014, Sage was named in, NBC's The Grio as One of the 40 Artists to Watch and Sage has not disappointed.

From interviews in the Huffington Post(http://m.huffpost.com/us/entry/4567025) to The examiner.com ( http://www.examiner.com/article/sage-gallon-an-up-and-coming-artist-discusses-his-art-culture-and-humanity ) successful shows in both Los Angeles as well as New York. Sage was one of the featured Artists at Miami's Art Basel 2016.

"I think that being raised in a commune, Synanon, was one of the greatest influences in my life. I was raised by over 400 people from all walks of life who genuinely cared for each other. That has always stuck with me, even in my dark times."

After moving back to New York with his Mother and Step-Father, Sage took a great interest in the Arts. Hempstead, the town he grew up in did not lend itself to his artistic interest, so Sage at a very young age would find himself sneaking into "The City".

" We lived an hour from New York City, my Mom by this time was a Single working Parent and I was a latch key kid. I was mature for my age and would often just get on the train and go. Crazy looking back now, a 12 year old in the City all alone, but I loved it. It seemed every corner was a master piece and of course the Galleries, the Parks, I love the Met and MOMA. I would get of at Penn Station, point my finger straight out, close my eyes, spin and what ever direction my finger pointed that's where I would go."

In High School, Sage had teachers and Friends that would challenge and inspire him. His only Artistic training would come from his High School Arts teacher, Linda Shear. He befriended a Teacher Kim O'Quinn who would show him parts of the City he had not yet discovered.

Sage attended the renowned F.I.T after graduating High School where he studied Fashion Design. Soon after, Sage was introduced to drugs.

" I was such a square as a kid, my Parents both had their battles with drugs and alcohol so I stayed clear of them. It wasn't until after F.I.T. That curiosity got the best of me. I was introduced to Crack Cocaine by these guys that did not fit the 'Crack Head' description that I had in my head. It took three months into the addiction before I realized that I was smoking Crack, one year to the day that I had fit the description of a Crack Head that I had in my head. I was homeless, picked out of a trash can for food, did all kinds of things to support my addiction. My friends, John, Karla and Deb worried to death about me but I was far gone."

In the early 90's Sage was sent to a rehab in DC to get clean, he left the facility and shortly after relapsed. A friend, Walter Neal, seeing talent in the young Sage purchased art supplies for him in hopes that he may find a way to express himself through Art. Sage's first painting "Blue Solitude" is still treasured by Walter. Sage took to painting like wild fire, producing over 400 paintings in both Acrylic and Watercolor. Though the battle with addiction grew, Sage move to Los Angeles CA, where he currently resides, he had stopped painting for some 20 years until the tail end of his final relapse.

" I for a very long time had nothing to say in that language [painting]. I had been clean for some 11 years, my life had changed dramatically, I had discovered photography and was in the studio recording my debut CD NAKED UNDER MY CLOTHES. That relapse was in some ways one of the greatest events in my life in that it was the catalyst that made me pick up my brushes. I am now over two years clean and what a two years this has been."

Sage's photos have been published in various magazines and websites, in 2015 he premiered his Series, Rocks and Hard Places ( from Castration to the Mandingo Complex).

"It's amazing to think that not that long ago I wanted nothing more that to take my life. I am grateful that did not happen. I want my work, paintings, poetry and my photography to reflect truth, humanity, and growth. I have been at the bottom, Hell, I even dug beeper down from there and I'm humbled and blown away to think that in two years my work has gone from selling from $250.00 to over $10,000.00. It's important, having been in the darkness, for me to always give back, that's why a portion of everything I make with my Art has to go to charity. I have been looked at with disgust and that's why I try to bring truth and humanity to my work. My greatest hope is to inspire people, to perhaps be a light, even if it's a single spark, to someone who may be living in that darkness right now."

Sage is currently getting more shows together, filming the rest of his Music Videos as well as working on several new photo series, Scripts and other Productions . In 2016 Sage was one of the Artists featured in the “I Found God in Myself” at The African American Museum in Philadelphia.

Please visit sagegallon.com for updates and more information on this Artist.